If you’re stuck somewhere snowless, dreaming about skiing Tahoe’s glorious backcountry, chances are that Jake’s is flashing through your head. With incredible terrain variety, long vertical drops, no approach and acid-blue Emerald Bay at the base of the hill, it’s no wonder that Jake’s is one of the area’s most popular backcountry objectives. South of Rubicon and Bliss, Jake’s is the southernmost peak on Tahoe’s classic West Shore ridgeline. During and after storms, North Tahoe locals gather en masse to harvest Old Man Winter’s offerings, and many individuals ski almost nowhere else around the lake. This can be a blessing during larger storms, where regular uphill traffic can keep the grueling skin track from disappearing. From the top, descents north and east afford some of the West Shore’s steepest glades through a beautiful old growth forest. These glades are well spaced, and sometimes have large enough openings to allow small slides to occur, so be careful. Most Jake’s skiers will ski this upper pitch 1,400’ down to the midway bench before turning around for another lap. When descending out of this bench for the car, traverse skiers right until reaching the skin track.

Moving south from Jake’s true summit onto the eastern aspect, a steep, open avalanche path is carved through the trees making for a unique opening on the otherwise forested West Shore. South of this avalanche path, Jake’s changes character from gladed terrain to a network of chutes and couloirs similar to the terrain of the Eastern Sierra. South of Jake’s summit, Emerald Point is the next peak down the West Shore, and holds some of Tahoe’s most inspiring descents. Emerald Chute and Eagle Chute both have somewhat hidden entrances, and will take a bit of exploration to find. Emerald Chute requires a deep snowpack to be skiable to the bottom, and sometimes requires a short rappel over a small cliff near the bottom. Separated from Jake’s by a large gully, Emerald Point can be linked up with Jake’s southern aspects to make for an incredible day. If trying to score powder on any of these south facing lines, be sure to get an early start before the sun wrecks your cold snow. 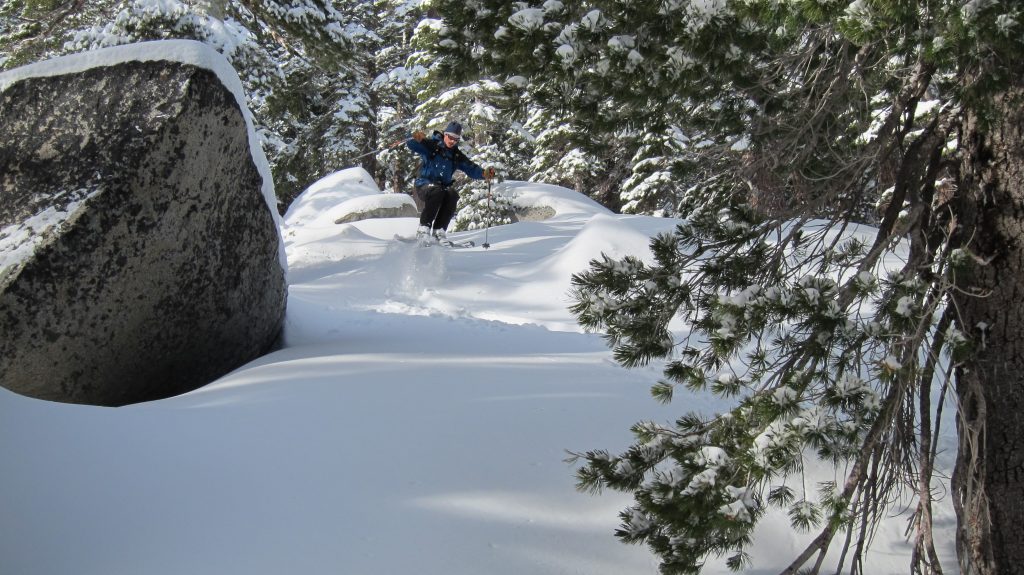 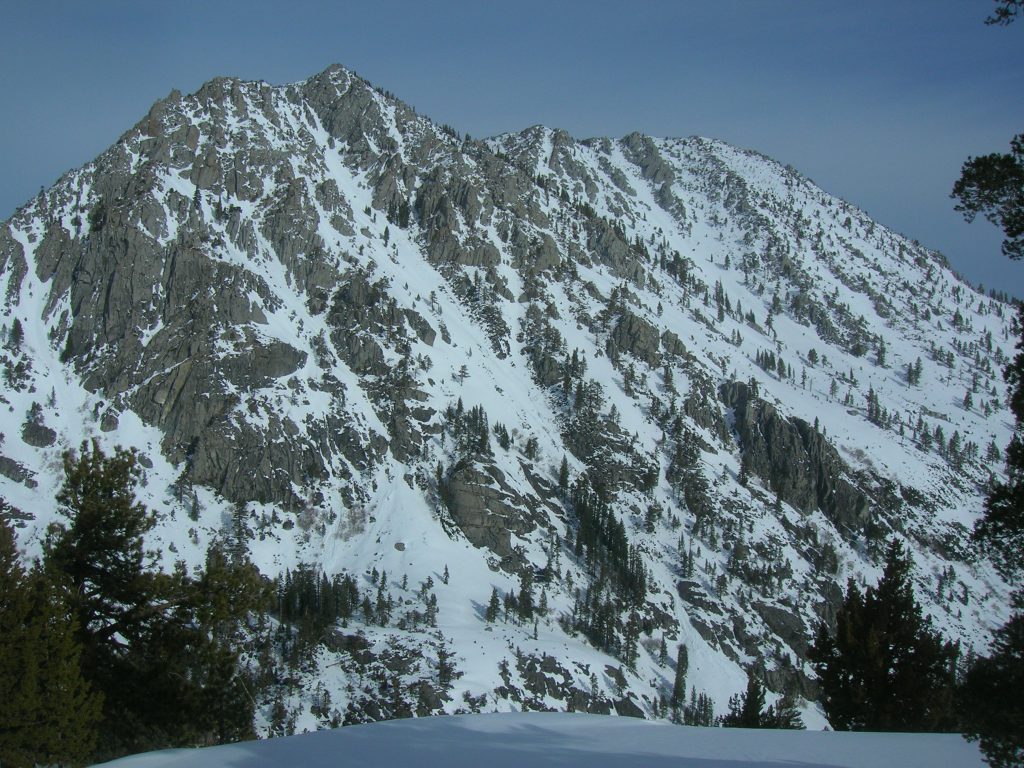 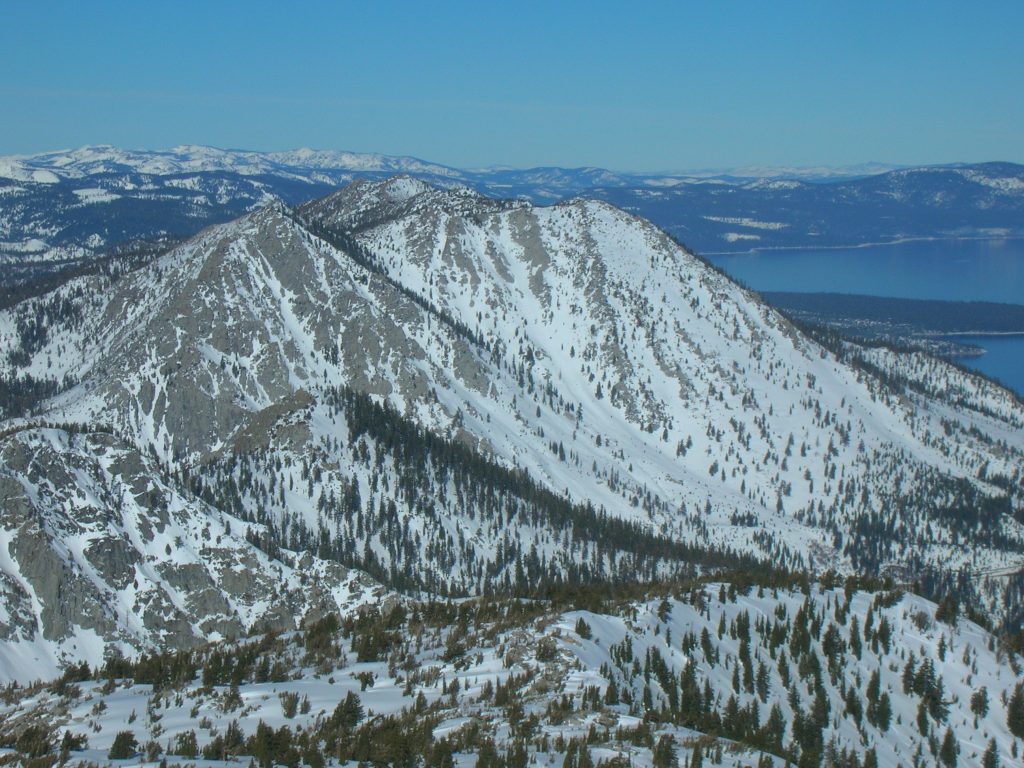 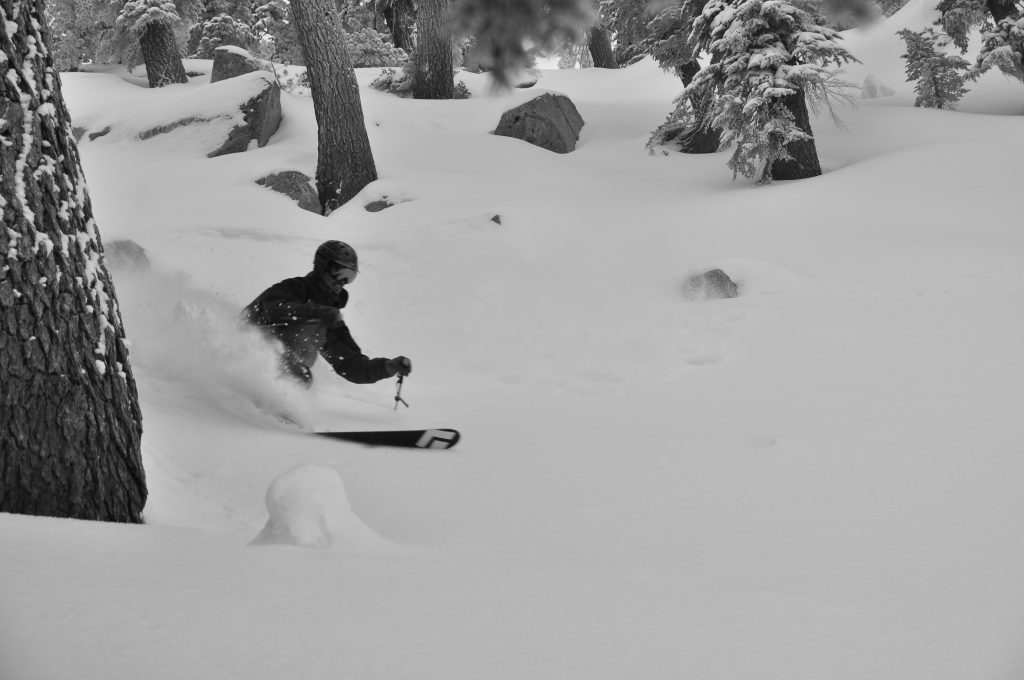 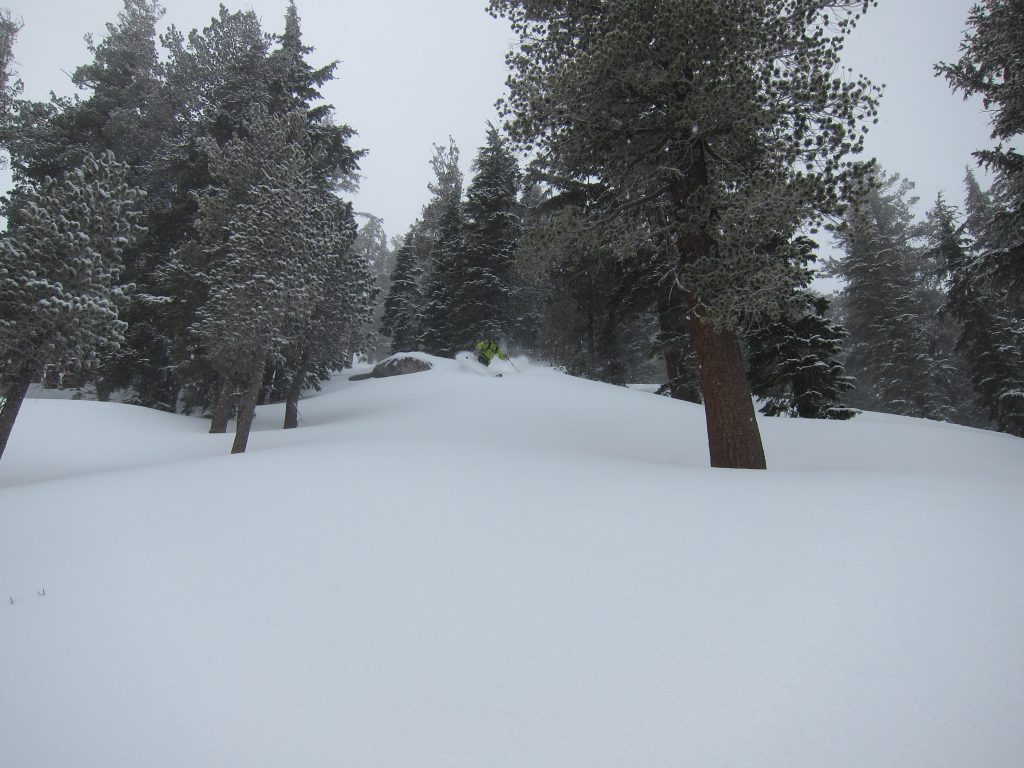 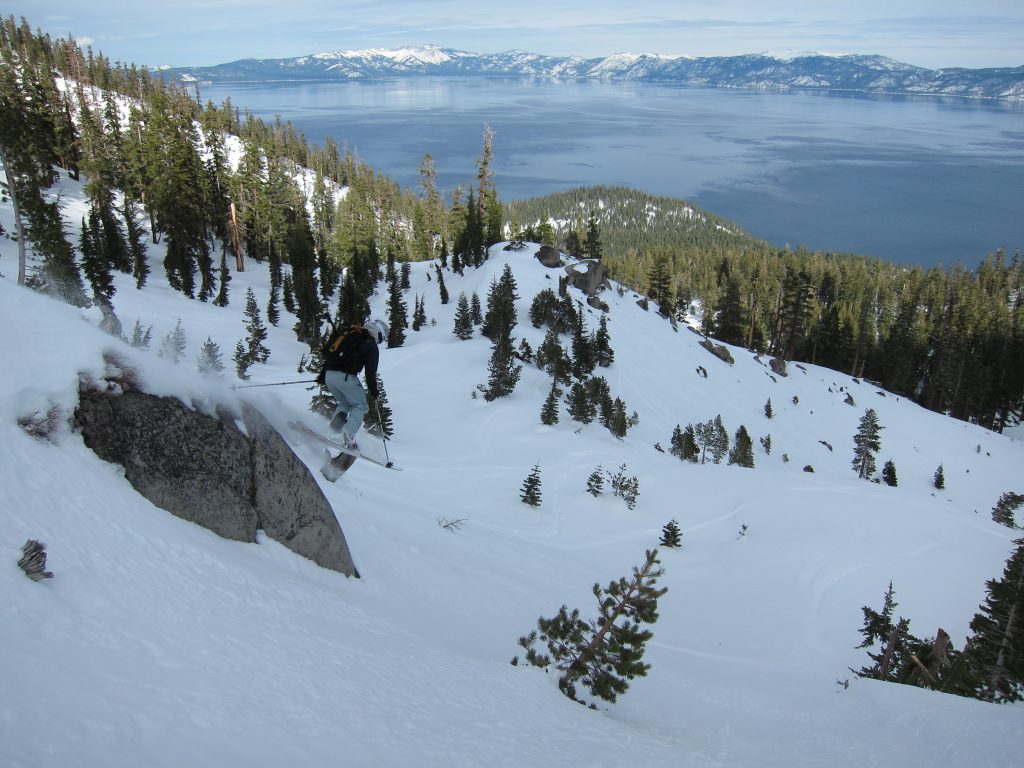 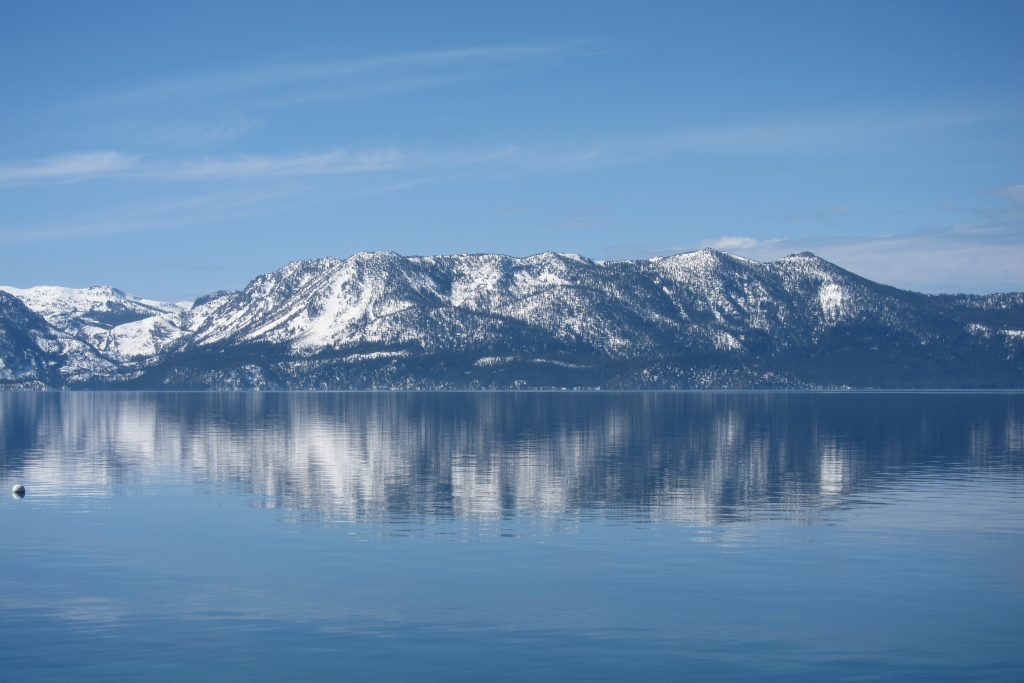 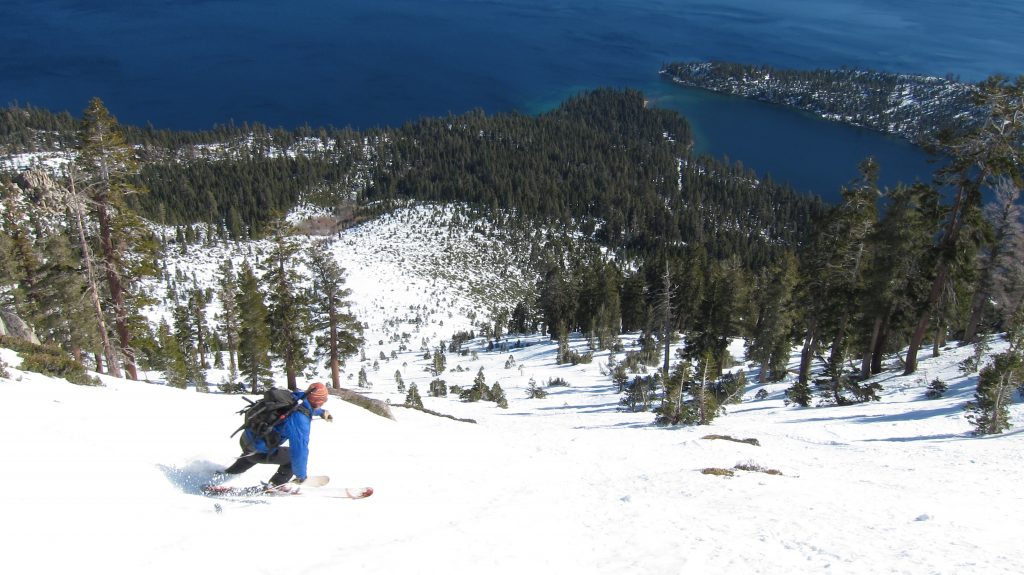 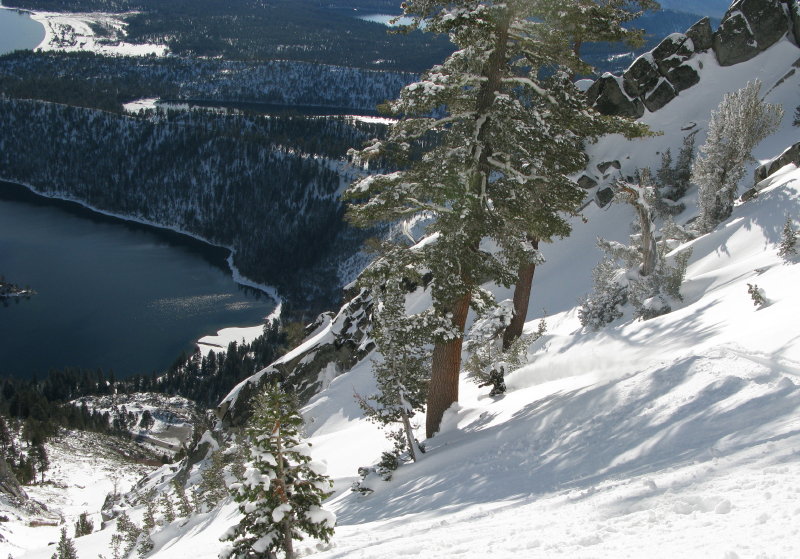 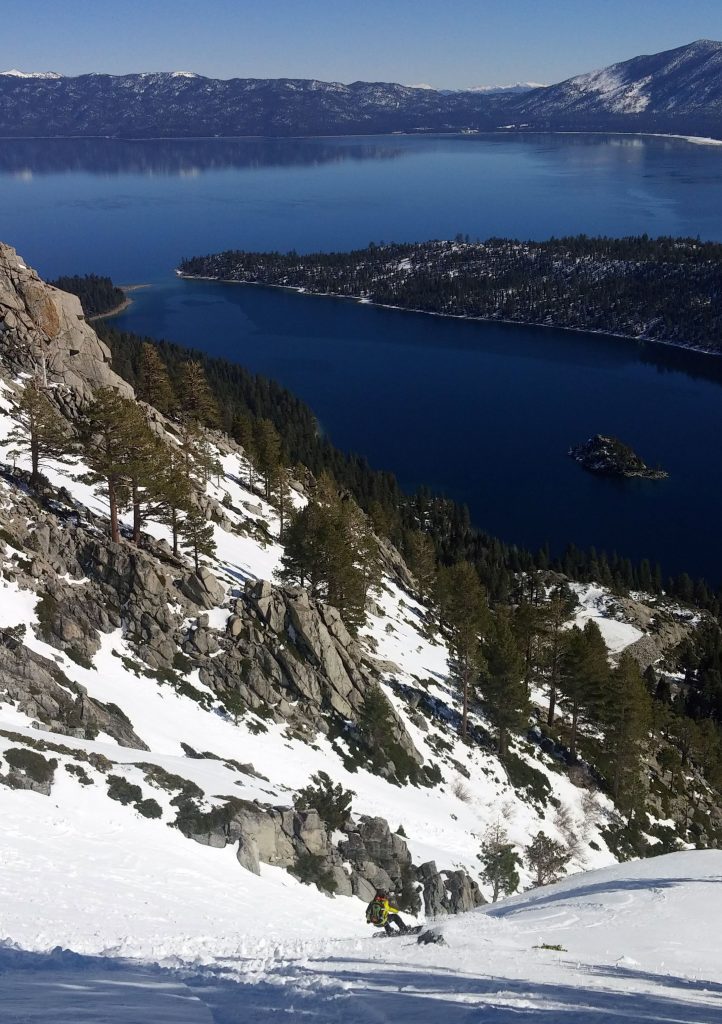 Parking for Jake’s is found in two main areas on highway 89. If skiing Jake’s treed terrain, park in a plowed pullout 16.5 miles south of the “Y” in Tahoe City, and 1.0 mile north of the avalanche closure gate at Emerald Bay. This lot is distinguished by a large rock outcrop on the west side of the road, and chain control signs. From the parking area, begin skinning to the right of the rock outcrop. Keep this rock band on your left during the ascent. Upon reaching about 7,600’, the skinning mellows briefly at the midway bench. Above this flat landmark, the trees become more spacious and steep, and summit navigation becomes more apparent.

If planning to ski Jake’s chutes and southern aspects, park in a small lot at the Emerald Bay avalanche closure gate, 17.7 miles south of the “Y” in Tahoe City, and 9.4 miles north of the “Y” in South Lake. From here, skin up the small snow covered road along quaint cabins. This will bring you to the large approach valley that splits Jake’s and Emerald Point. This approach should be avoided during periods of low snowpack or high avalanche danger. Remember, that if you’re accessing anything on the West Shore from South Lake, be sure to check with Cal Trans if highway 89 is open around Emerald Bay.